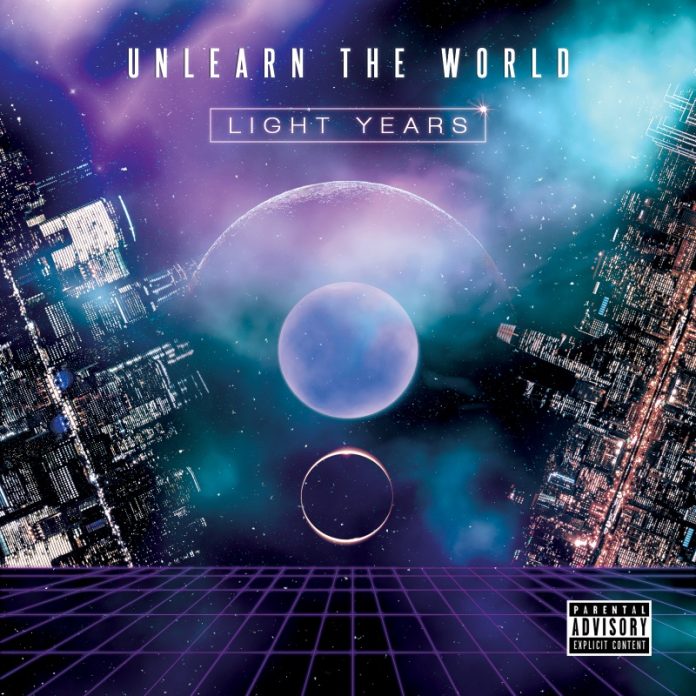 Music Review for the new release by UnLearn The World titled, ‘Light Years’

UnLearn The World is back with a brand new album release, Light Years.

The energy of hip-hop meets a more melodic approach.

September 2020 – UnLearn The World is an artist with a focus on creating original music that lets different genres overlap. From the punch of hip-hop, down to the melodies of R&B, UnLearn The World blends in all of these different influences very tastefully, going for a distinctive and one-of-a-kind sound. His most recent studio release is titled Light Years, an album that expands over the span of 16 tracks. This music actually stands out as a perfect example of what drives UnLearn The World’s sound. It’s all about energy, but there is also room for ambiance and melody, taking the artist’s sound to a more nuanced level. This is definitely going to be something for you to enjoy, if you are a fan of artists as diverse as Nas, Eminem, and Kendrick Lamar, only to mention a few.

Light Years is definitely a good introduction to UnLearn The World’s creative vision and it is impressive both in terms of production and musical execution alike. The artist arguably worked hard on making this one a home-run, and the songs speak for themselves.

Learn more about UnLearn The World’s music, and do not miss out Light Years, which you can currently find on the web’s best digital music streaming platforms.

As a born and bred product of the late 90’s New York City underground Hip-Hop scene, UnLearn takes the best from all dimensions of songwriting, in order to showcase his substantive, yet accessible brand of lyricism, while he chronicles the emotions, triumphs, and tragedies that make up his Urban American experience.

Early on as a performer, UnLearn received notoriety as a supporting act for the Lyricist Lounge Club Series Tour, opening up shows for Dead Prez, Killer Mike, and Hip-Hop Icon, Big Daddy Kane. In addition to working with artists and producers including; Fat Joe, Jean Grae, Jake One, and The Beatnuts. Most recently, he has shared the stage with Wu-Tang’s Ghostface and Raekwon Planet Asia, Skyzoo, Griselda, Jay Electronica, and Talib Kweli and has toured with Hip Hop icon, KRS-One.

In addition to being one of the more popular and dynamic EmCees and performers in the Bay Area, he is the host of several radio shows and podcasts and a member of the All Tribes San Francisco Chapter of Zulu Nation.

Hip Hop Renaissance Man UnLearn The World presents his 4th studio album “Light Years”. Described as a self-produced “Jedi Super Hero origin story” UnLearn reflects on various eras of his life and celebrates his current state of mind, reflecting on trials and tribulations while presently living triumphant during turbulent times. Be prepared to step into the light…