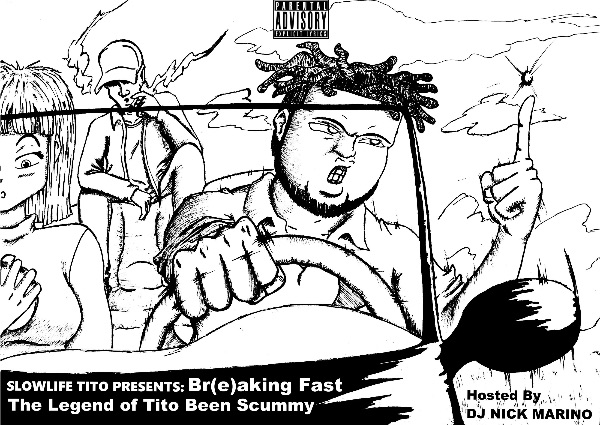 Slowlife Tito – Br(e)aking Fast : The Legend of Tito Been Scummy

Hailing from frost bitten Milwaukee, Wi , Slowlife Tito (aka Tito The Scumbag) hits us with his debut project embedded with 8 (10 including 2 secret songs!) paintings in this art project. Production is phenomenal all handled by Nedarb Nagrom, Cat Soup(TeamSesh), Silk.y Soap, Moon Aype, Mike Regal, Air Tech Sani, Bitoy Beatz, and Isaac Ligues (R-Pugnantez) who have all always been a monster with the production hauling in credits with multiple big named artist who have paved a way for the underground and new waves that inspire.

Hosted by none other than Dj Nick Marino of Marino Gang/Marino Infantry and affiliated with Asap mob, who also manages A$ap Ant/Yg Addie. Overcoming a lot of things such as depression and multiple humbling but eye opening events title finally releases a long waited project with multiple songs that contain life lessons, reflections on life and himself Slowlife founder Slowlife Tito finally releases a project after about a year and a half of being dormant in his tomb.

This young artist is also a noted videographer, producer, photographer, and entrepreneur as well and you can see by the passion in the way he delivers his blessings with his music mix and mastered by Tae The Don Productions. This is only the beginning as Tito is rumored to have over 300 private songs and a few visuals as well in his vault releasing in the near future. For more updates follow him on twitter @NorthsideTito @NedarbNagrom @BitoyBeatz @CFGSTA @DjNickMArino @AirTechSani @MoonAypess3 @Silkysoapffs