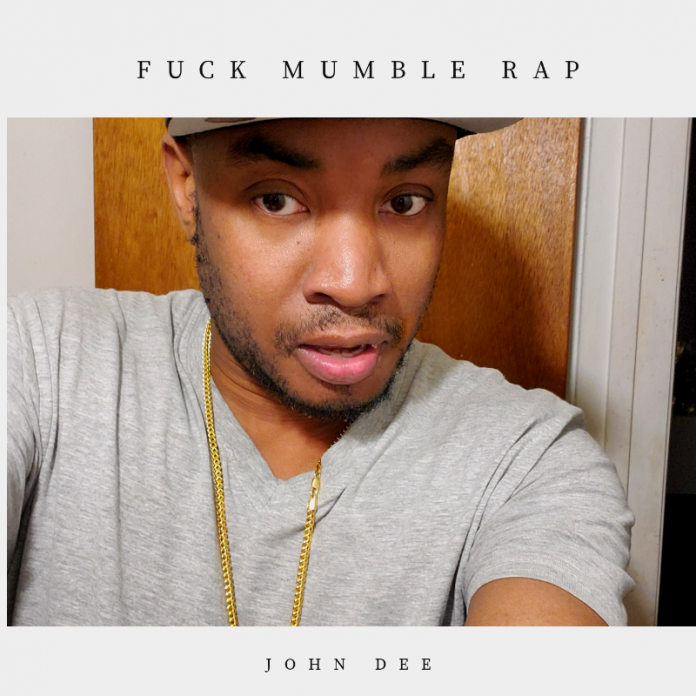 John Dee is taking a stand with his fresh track “Fuck Mumble Rap”!

John Dee is a hip-hop artist hailing from New York. His brand new release “Fuck Mumble Rap” is a hard-hitting and direct protest against the shift in contemporary rap music.

In this track, the composition starts with a smooth R&B inspired beat that gives it a chilled vibe. This laid-back instrumental contrasts with John Dee’s “in your face” lyrical flow. This artistic decision makes “Fuck Mumble Rap” a creative and unique modern release.

Even though this track is focused around criticizing “Fuck Mumble Rap”, it’s performed with humor and cutting-edge one-liners. In this release, John Dee recalls old-school hip-hop with great storytelling and attitude.

In John Dee’s career, he has been mainly inspired by talented rap artists such as Jay-Z and 50 Cent to mention but a few. Yet, distinctive style in his new release also recalls the likes of Kendrick Lamar, Biggie Smalls, and Tupac among many others.

If you are looking for a change from rap artists such as Lil Wayne, Future, and Kodak Black taking centre stage, then you’ll definitely enjoy “Fuck Mumble Rap”

Follow the social links below to find out more about John Dee and keep updated on his new releases!

KI Back At It presents: Going Hard Taken from the album “Addicted to Hip-Hop” September 2020 - KI Back At It is a rap...

September 2020 - Prince Kapone is a rap artist originally from Monticello, New York. His sound has got a distinctive East Coast flavor that...

Aim The Rapper – In The Word Today

Aim The Rapper presents the Official Music Video for, 'In The Word Today' Aim The Rapper a gospel hiphop artist they call him. Born in...

Bosswood presents the visuals for new release: What's Poppin' What’s poppin?! New Visual, WhoDis!? Bosswood is back with another insane freestyle. This one went so...

GV – By the Palm Treez

By the Palm Treez by GV Crowds have poured in from all over to listen to the magical vibes dished out by the astounding rapper...

GV – Lose It (Calm Before The Storm)

Check out, 'Lose It' by GV, taken off the full album: Calm Before The Storm Crowds have poured in from all over to listen to...

itsHIPHOPmusic brings to you 'Self' by the talented GV: Crowds have poured in from all over to listen to the magical vibes dished out by...